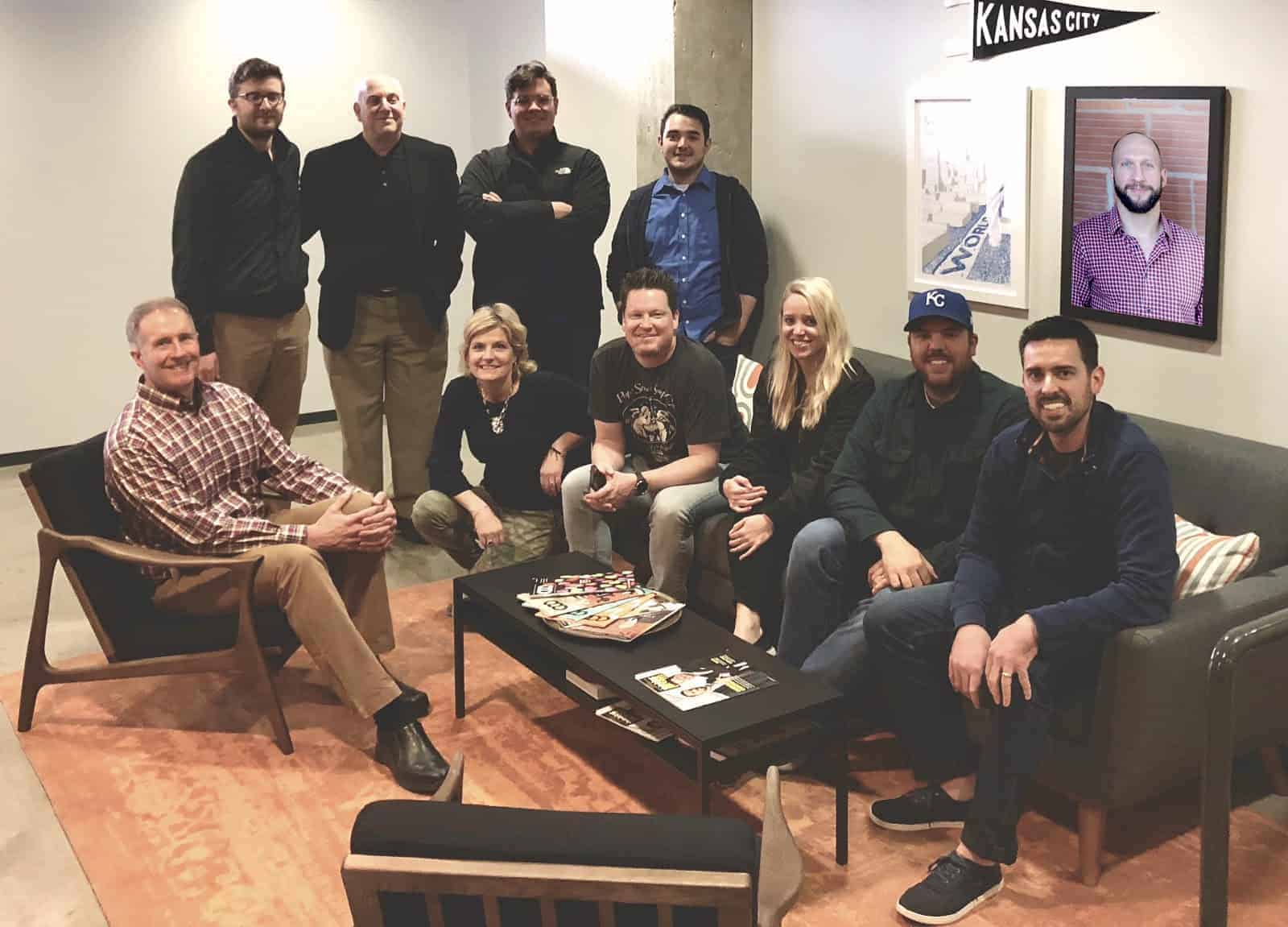 DivvyHQ is a content marketing platform that is a planning and workflow tool used by heavy-hitting content producers like Aflac, Red Bull, Mercedes-Benz, the National Geographic Channel, and many others.

We talked to DivvyHQ co-founder Brody Dorland about how the content marketing platform company got started and how a company lines up high-value customers like the ones listed above.

As you’ll read, DivvyHQ’s success has a lot to do with the co-founders’ strategic networking tactics. (Spoiler: Content Marketing Institute founder Joe Pulizzi played a big role in the launch of the platform).

Specifically, Dorland and co-founder Brock Stechman were super smart about finding allies, building relationships with influencers, and understanding customers from the perspective of an agency and product developer.

Here’s the DivvyHQ story, including what you can do to put yourself in similar positions.

Ten years ago, digital marketing was still a relatively new concept. For many companies, it was a wholesale shift in how they marketed themselves, and the process changes proved difficult to manage.

As Dorland explained, “Email platforms like MailChimp and Constant Contact were making email marketing really easy to do, websites and blogs were getting easier to deploy through platforms like WordPress, and all of the social networks were starting to explode. Companies were trying to come to grips with all these new marketing technologies. They recognized the power of leveraging all these new channels to engage customers, but these new channels required a regular flow of good content.”

Dorland and his partners created their own proprietary marketing strategy process, a big part of why his own marketing consultancy took off around 2008. He had a knack for seeing how all of those new moving parts he spoke of — email marketing, blogging, SEO, social media channels, etc. — should work together.

One of the primary deliverables for new clients going through their strategy process was a starter editorial calendar which covered the first three to six months of content.

“It was all of the web, email, and social content — the actual individual topics we’re going to cover, who was responsible for them, who the audience was going to be — everything we needed to execute the new strategy we had just developed for them,” Dorland said.

However, executing those strategies was always a challenge. “It got to the point where, as the projects continued to grow in scope and scale, my hoard of freelancers got harder and harder to manage on individual projects,” Dorland explained.

Dorland and Stechman — both from Kansas City — decided to team up.

“We essentially merged behind the scenes,” Dorland told us. “Any time anything came through the Brockton Creative Group front door, they would bring me on to do the upfront strategy engagements. For anything that came through my front door, I would have Stechman’s team do all the execution. And we started doing that for every project.”

The partnership was a huge success, and it was the beginning of a long-term arrangement.

In 2011, content marketing was gaining traction as a driver of strategic business growth. Not coincidentally, 2011 was also the year the Content Marketing Institute was founded and the first Content Marketing World conference was held.

(That will become important in a bit.)

Dorland, along with co-host Jayme Thomason, launched a podcast called Content Marketing and Merlot to discuss content marketing tactics and build connections around this important new facet of online marketing.

The show’s not available online anymore, or we’d link an episode for you. We did find a few old landing pages from previous episodes (even though the audio didn’t work).

“The podcast was integral in gaining some of those early relationships,” Dorland told us. “Even today, there’s still a certain amount of novelty to being asked to be a guest on a podcast. It opened some major doors to people like Joe Pulizzi and Jason Falls.”

The team usually recorded the podcast in the atmospheric cellar of a wine retail store near their office. After work, they’d buy a bottle of wine, set up their audio equipment, and discuss both the wine and content marketing concepts.

Doing a podcast about a new concept (content marketing) in a novel way (while enjoying wine) was a winning combination.

Dorland explained the content marketing part further: “We would dedicate an episode to something like the importance of proper persona development because we were literally doing that as part of our day-to-day process and digging into what that entails.”

The podcast also helped potential clients understand the value behind what they offered. “It could be its own marketing machine by itself,” Dorland said.

You never know which one will hit, but the more bets you make (or, the more relationships you develop), the more likely one or more of them will pay off — sometimes in ways you’d never dreamed were possible.

Stechman and Dorland were developing their skills and their network — all around the topic of content marketing.

Their biggest issue was scale.

When Dorland created those starter editorial calendars to map out six months of deliverables for each client, he did it using an Excel spreadsheet.

Back in 2011, people weren’t widely using cloud-based documents (such as Google Sheets).

That led to all kinds of problems.

The calendar was emailed around between team members and clients, and no one was ever quite sure if they had the latest version of the calendar or not.

Projects sometimes got lost. Deadlines were sometimes unclear. It worked well enough to get by, but it could be messy.

That led the team to try several project management tools. They, at least, were cloud-based. They worked well for general projects, but nothing they tried had the features they really needed to manage a full content process.

“What if we just build something ourselves?” the team concluded out of frustration one day.

Their concept was to replace the Excel spreadsheets with something more collaborative: a project management tool specifically designed to organize content strategy, content planning, and production workflows.

It seemed like a great idea to improve their internal efficiency, and they started to wonder if there was a market for a content marketing management tool beyond their own organization.

“Joe Pulizzi was on the board of a company in Kansas City,” Dorland said. “We found out he was coming to KC for a board meeting, so we bought him dinner and said, ‘Hey, we’re thinking about building something. Is this something that would be a viable idea to roll out to this starter industry you’re working on?’ And he was like, ‘Absolutely.’”

It was at this moment that opportunity struck: Pulizzi made them an offer.

If Dorland and Stechman could put something together in time, Pulizzi said, they could demo their new tool at the first Content Marketing World event happening later that year (September of 2011).

So they got to work. Stechman led the effort to raise around $90K from friends and family to accelerate the process of developing the platform. They incorporated a separate company, created a prototype in two months, and launched the newly named product, DivvyHQ, at the event.

Pulizzi had been right about the demand for a solution like this. There were several Fortune 500 companies in the audience for Dorland’s presentation.

“There were representatives from McDonald’s, Toyota, Dell, and Nokia at the event… And they immediately signed up for a beta because, as it turns out, we weren’t the only ones struggling with the painful process of creating content,” Dorland said. “It exploded from there. We got over 500 companies on our beta between our pitch at the show and promotion of the launch on Twitter.”

In the years since that September 2011 presentation at Content Marketing World, Dorland and Stechman have raised $3.5 million between two rounds of VC funding.

They could have raised more, but revenue has been growing enough to meet their needs. “We’ve been able to sustain solid growth without getting additional funding,” Dorland told us.

One key to their success since launching their product has been their dedication to their customers.

When the DivvyHQ content marketing platform launched, they were still running an agency as well, and that gave them unique insights into the needs of their customers.

For instance, their agency clients helped them understand that teams within a single company may prefer to work independently on different campaigns and strategies. They built DivvyHQ around that idea.

“Customers were able to use a hub-and-spoke structure so that at the hub, the executive team can see everything that’s going on in all of the different spokes,” Dorland said. “Meanwhile, the different spokes could also set up their development environments the way they needed to, with their own strategies and workflows.”

As their user base grew, they developed new features to support different types of clients.

For example, in the early days, one large client came close to crashing their system. They added upwards of 250 users and were trying to manage thousands of content projects from one account, a use case and scale Dorland and Stechman had not yet considered.

Once they saw the need, they made changes accordingly.

It’s an ideal choice for companies committed to content marketing — or that are looking to improve their content process.

It also has a free trial if you want to try it out.

The Power of Personal Connections

Throughout the DivvyHQ story, Dorland and Stechman expanded their network while gaining experience and insights by:

They didn’t know that Joe Pulizzi would be a key reason they’d be able to get in front of heavy hitters like Toyota and Nokia.

They were—however—working hard to put themselves in a position for those kinds of lucky breaks to happen.

When opportunities arose, they took advantage.

Whether you’re growing a business or just want to advance your career — that’s advice worth remembering.

Set your preferred trigger, cadence, and time zone preferences.
Send weekly or monthly newsletter digests of your newly published blog posts.
Send update emails whenever a blog post is published on your site.
Only send newsletters when a certain number of blog posts have been published.
start a free trial
Sign up for a free 7-day trial. No credit card required.