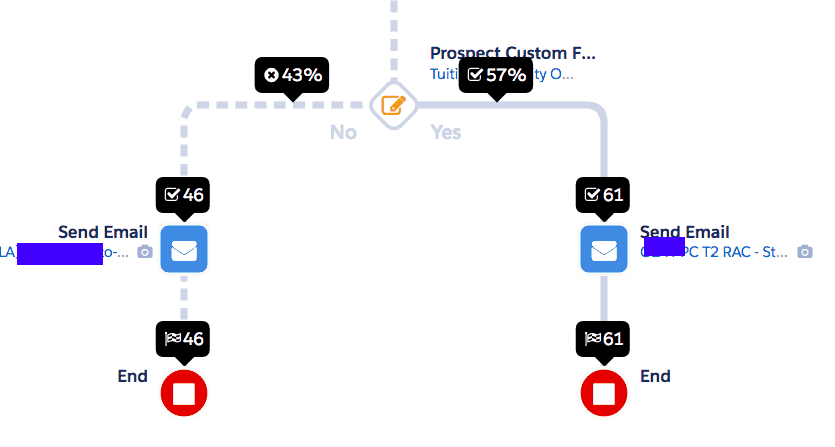 The Pardot Engagement Studio makes email marketing automation a breeze—if you know how to take advantage of all of its features. The Pardot Engagement Studio allows you to visualize all of your drip email campaigns. A drip campaign is like an irrigation system for your email-generated leads. A pool of leads trickles down a system of gated canals that open or stay closed depending on prospects’ actions and characteristics.

Pardot allows you to establish three important things to understand first before diving into Pardot Engagement Studio: actions, triggers, and rules. Fortunately, while there is a learning curve, it all makes sense once you start putting automation into practice.

In Pardot Engagement Studio, actions are tasks the program performs on your behalf. The actions you can initiate are:

All the actions Pardot offers give you full control of prospect organization, interaction, and user assignment. Design your actions thoughtfully for effective and low-maintenance email automation.

When it comes to timing your actions, you have two choices for when Pardot will initiate actions after a prospect reaches a certain step on your drip campaign’s pathway: 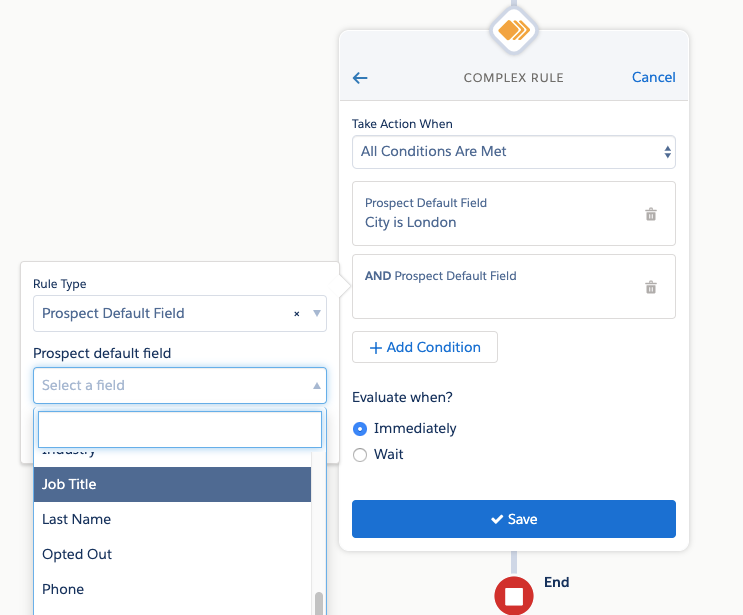 Triggers are actions performed by email recipients that initiate certain steps along the path of your drip campaign. They’re like gatekeepers along the route your email prospects take from initial contact to (hopeful) conversion.

The Pardot Engagement Studio triggers include:

Deciding which triggers to use and where to place them along the path is a crucial component of your drip campaign. Certain triggers should only initiate certain follow-up emails and/or actions. For example, if a recipient hits the “Form” trigger by opening a form, you’d want to follow up with an email encouraging the recipient to return to and complete that form. When your emails are targeted and specific, there’s a greater likelihood of conversion.

You can choose how long Pardot Engagement Studio waits to assess triggers with the following timing options:

Pardot rules are what govern which paths email recipients will take. They are like the different branches of an irrigation system; depending on factors like grade, user assignment, and campaign, recipients will trickle down your drip campaign by way of the most promising routes you design for varied scenarios.

The rules you can choose include:

Not all paths are created equal—and for good reason! Your recipients form a mixed bag and each pathway requires specific actions, triggers, and email templates to best suit their varying needs. Defining and creating different rules will help you organize your drip campaign and strategize the best email marketing tactics for the wide array of recipients you contact.

You can decide when rules are put into action by choosing between the following rules timing options:

Once you have your parameters for actions, rules, and triggers in place, you should always run a test to ensure the paths you’ve created are effective and work properly. Pardot Engagement Studio offers testing so you can go through your entire drip campaign from start to finish and verify everything works as you’d expect.

Being able to see where your users are going is extremely important when thinking big picture, but the real value is being able to drill down into your reporting while still keeping this visualization happening. This makes it much easier to keep track of what you want to edit and why, saving you time sifting through multiple campaigns and multiple emails within those multiple campaigns.

Once your drip campaign is up and running, you’ll need to monitor how well it’s working. Pardot Engagement Studio offers the following to help you track the effectiveness of your pathways:

As you can see in the screenshot below, it’s as easy as hovering over a campaign in the Pardot Engagement Studio to see your reports by clicking on the links. This helps keep the visualization a part of your decision making so that you don’t have to sift through all of your campaigns and each email within each campaign to see the information you need to see. You can even click the camera icon to see a photo of the email.

As your company scales, this will be extremely important (trust us!).

Now you have a general idea of how Pardot Engagement Studios helps you visualize and organize drip email campaigns. However, as you go along, don’t forget these tips and best practices for a smooth email automation experience:

For a successful email drip campaign, you’ll need to put a good amount of time into deciding what your rules, actions, and triggers will be. Once everything’s set up, you’ll still need to tinker with your settings and designs but Pardot Engagement Studio should be able to do most of the heavy lifting for you. Now, go forth and automate some emails!

Here at FeedOtter, something that’s usually on our minds is how to streamline the process of creating routine, content emails and newsletters that you can easily push to your email sending platform. And what better way to automate content emails than adding an RSS feed into Pardot? Let’s look at the need for an RSS […]

When it comes to marketing, emailing your clients and prospects is a great touchpoint for interaction with customers. Using Marketo’s A/B Subject line test will help you ensure you have the perfect attention-grabber for your emails. When emailing, many emails go straight to the trash or unread. How can this be reduced? According to Yes […]

Working with email automation and customers sending website content to their subscribers, we see lots of questions about high unsubscribe rates and what our best tips for reducing unsubscribes on routine content emails are. Gaining lead subscribers is one thing, keeping them can be just as difficult for marketers.  Reducing Unsubscribes The first step to […]

Read More
FeedOtter Can Help You Automate Blog and RSS Email
Promote your content and increase revenue from website traffic.
REQUEST A DEMO